Asparagus is a big deal in Germany in the summer. Germans prefer the white variety that grows from April to June and you can find it on almost any seasonal menu. I look for my asparagus at home to have a small stalk. Check out the stalks on these! I could hardly cut through them. Go big! 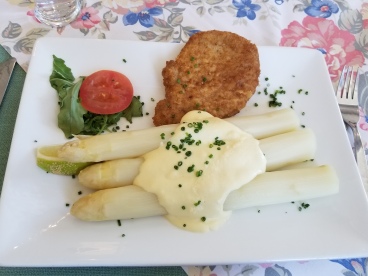 Bread is a religion in Germany and the best way to eat it is covered in butter and topped with sliced meat or cheese.

Public pay restrooms are actually a delightful experience. Here is our TOP Study Tour group watching one of our fellow participants use one in Hamburg. Might as well have been a theater production. We were all pretty fascinated. I used one in Potsdam. When the door closed music started playing. When I was done, the door closed and the bathroom initiated its self-cleaning process. My fellow TOP traveler couldn’t use it until the cleaning was completed. I thought it may be an awful experience similar to Porta-Potties in the United States. Wrong! It was actually pleasant.

And, another note about restrooms. I locked myself into two while in Germany. One in the basement of a gelato shop and one at someone’s home. They can be a challenge. Privacy is important when it comes to restrooms too. Doors on public restrooms in Germany don’t let a sliver of light through like American bathroom stalls. They also have heavy duty locks. Hence, my troubles with locking myself in them. 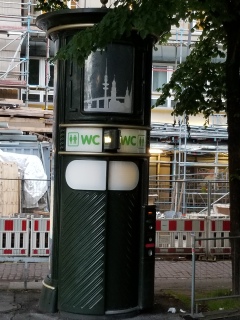 German coffee is phenomenal. I was spoiled while I was there and something I have been trying to replicate since I got home. This was not a special coffee order. Just a regular coffee with cream. Coffee service is a bit of an art form. 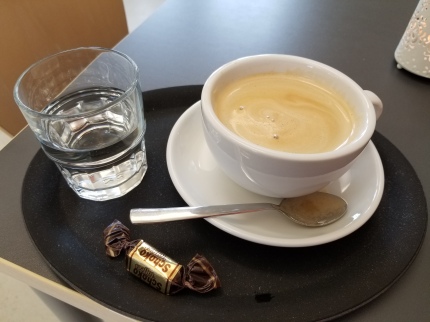 And ice coffee is a bit of an experience. Hot day, hot bakery (no air conditioning in most buildings in Germany), so we ordered ice coffee. This is what we got. We were expecting coffee on ice and we got this. It was delish!

Being so far north will mess with your internal clock. This is the view from my hotel room in Hamburg at 10pm. The sun came out early too. At least once on the trip we all woke up at 5am thinking we were late for our programming only to find out it was still only 5am!

Banana beer is yummy! Who would have thought? 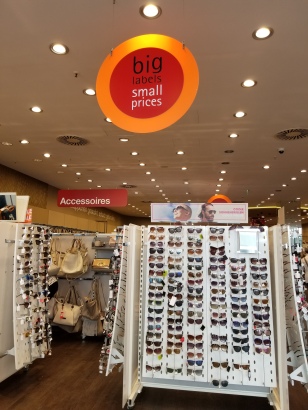 This is the hotel in Berlin where Michael Jackson hung baby Blanket over the balcony. Just in case you were wondering. 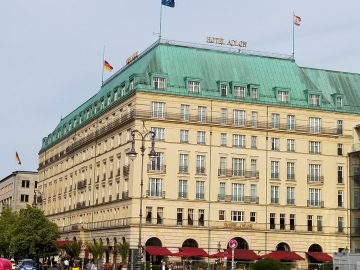 People leave potatoes on the grave of Frederick the Great. He introduced potatoes to Germany and made them a staple crop. Old Fritz also requested that he be buried with his greyhounds. Frederick and his pups rest in a modest grave. We almost missed it on our day trip to Potsdam, in fact. Barely noticed it was there. Here are Frederick the Great’s words:

I have lived as a philosopher and wish to be buried as such, without circumstance, without solemn pomp, without splendour. I want to be neither opened nor embalmed. Bury me in Sanssouci at the level of the terraces in a tomb which I have had prepared for myself…

Frederick wasn’t actually buried at Sans Souci until after reunification. His dogs were waiting there for him. 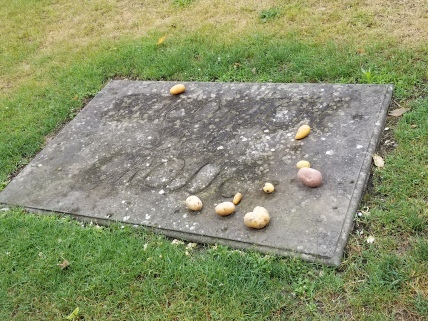 This is a Franzbrotchen, a cinnamon pastry found in northern Germany. I gobbled up this one near Hamburg. It is amazing!

School supplies in Germany are epic. I would have bought this bendy ruler for my son, but metric system, ya know? More on all of this in another post later. 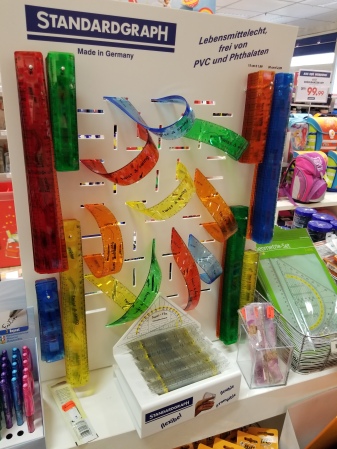 Chocolate is also a religion in Germany. Ritter Sport, Milka, Mozart Chocolate, Kinder Chocolate. At Ritter Sport in Berlin you can make your own candy. This chocolate Reichstag is from Fassbender and Rausch in Berlin.

You can read more about some of my German adventures here.