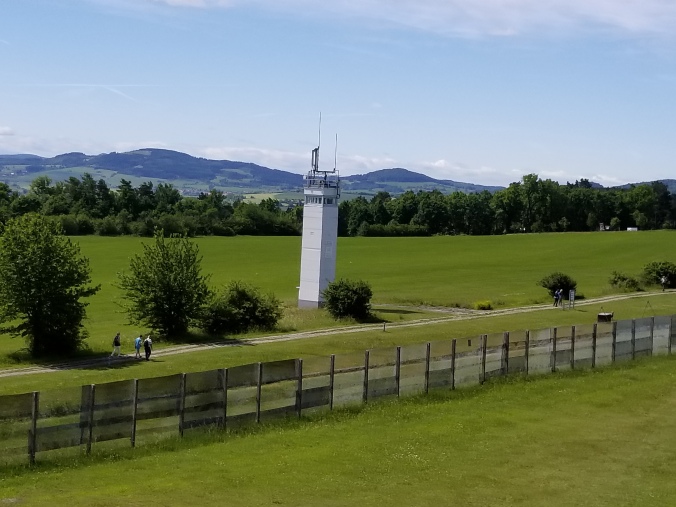 Two Mondays ago I was at Point Alpha on the Inner German border near Geisa. I knew from the moment I got there I had to blog about the interpretative strategies in the museum.

The Point Alpha foundation was established to be a place of commemoration and learning in 2008. For years it was the spot where East and West glared at one another. It was the Cold War observation point between Rasdorf, Hesse (West) and Geisa, Thuringia (East) from 1965-1991.

One million people visit the memorial foundation site each year.

An educator at the site we spoke with hopes the site will communicate “that politics is not a matter that is far away from your lives.” Between the museum exhibition, the outbuildings, and the first hand account from a contemporary witness this big idea came through loud and clear.

This is how you enter the museum: 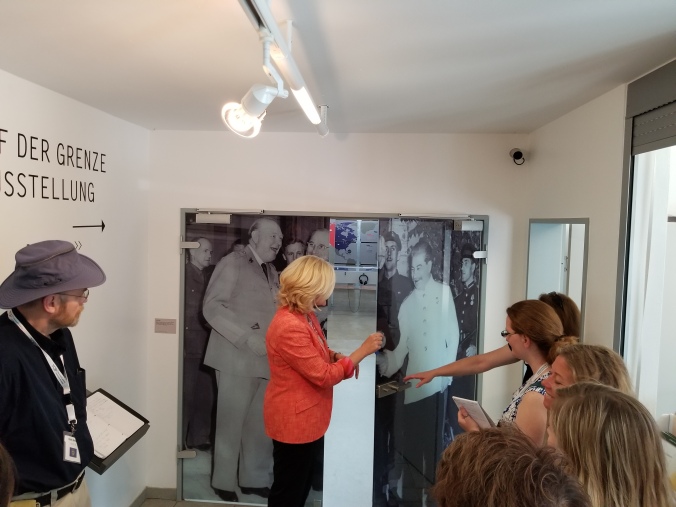 An image of Churchill, Truman, and Stalin taken at the Potsdam Conference that opens exactly on the division of east and west.

Inside the museum a variety of exhibitions tell the story of the building of the wall, from a small fence to the reinforced fence. The museum is built directly on top of the dead zone (the area between the east and west borders) and the border fence itself. 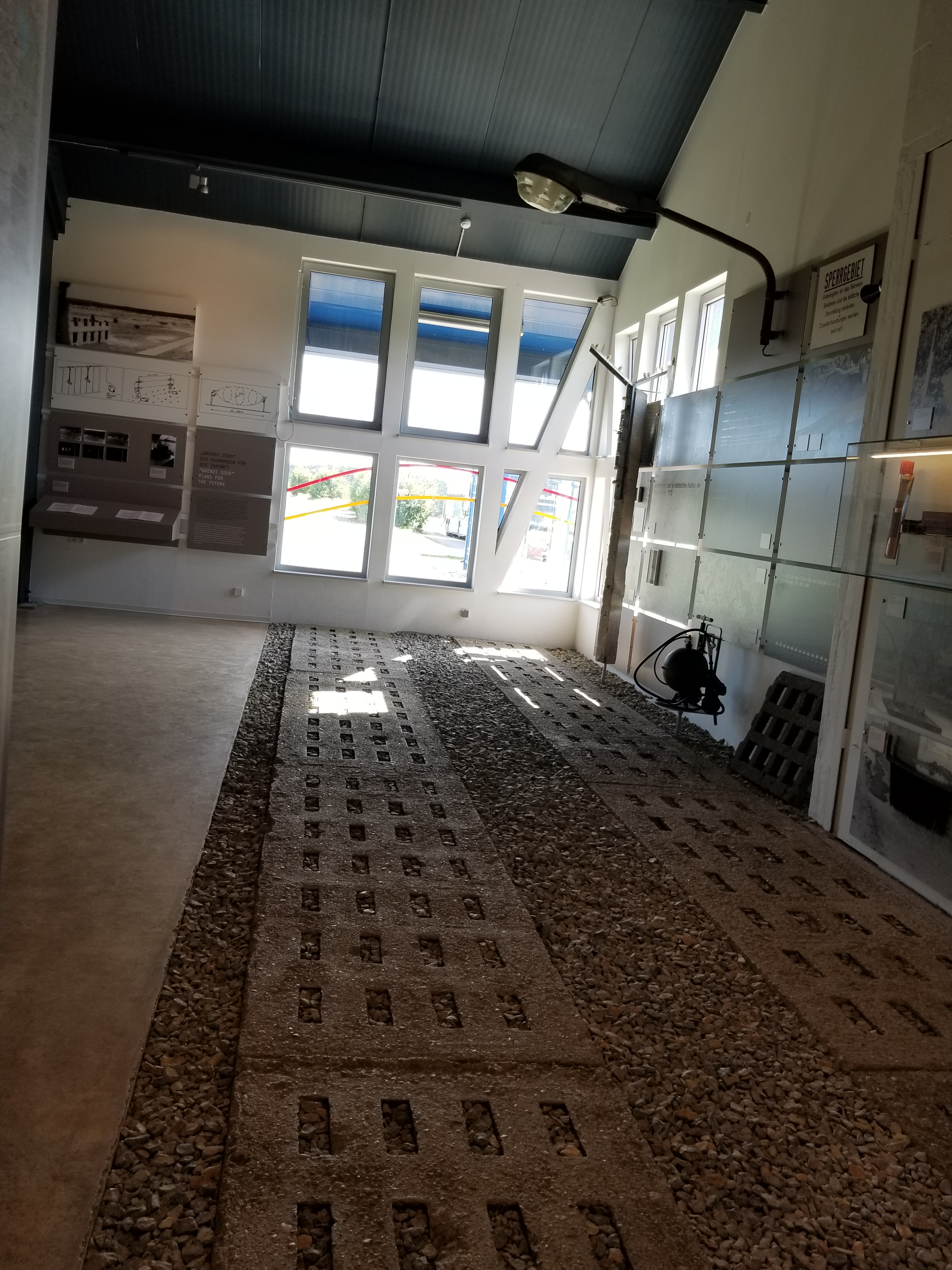 The exhibit also tells the story of the individuals who lost their lives trying to cross over into West Germany.

Reunification was not that long ago. A story booth is available for visitors to share their experiences. 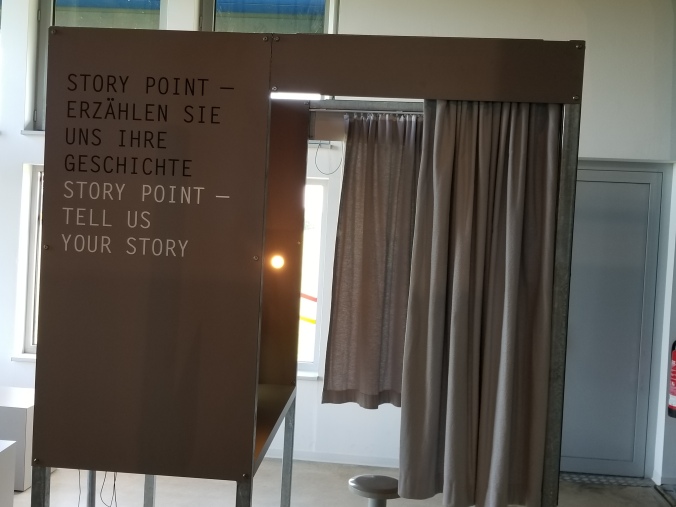 Because the area was not developed for so many years, the area is now a wildlife preserve and the second story of the museum is devoted the animals and plants that make up this region of Germany.

I would say I was pretty naive about the Cold War prior to this visit. I was a child when the wall fell and it’s not an era of history I typically teach. After visiting with a contemporary witness, my eyes were opened to the controlling atmosphere of the GDR.

The witness we heard from was a typical resident. She followed rules and says she “grew up saying yes to everything.”

She recounted stories of state intervention in the private lives of individuals. In order to travel within the state she needed a permit and a good reason to travel, a family event for example. Even with the permit there were only certain roads she could travel and she had to keep a diary to document the visit for the authorities. The diary included who she visited with and what they did.

Looking back she realizes the positives of the system (child care, health care, and low unemployment) were meant to keep the residents of the GDR happy so they wouldn’t criticize the political system.

Until reunification she wasn’t even aware there was a U.S. observation point nearby. Looking back, she realizes communism in the GDR was not sustainable. Food was subsidized, water was free and electricity was reasonably priced. Somehow there was always a shortage of many things, like citrus fruit.

One of the most profound moments of the visit was when she shared this box. Living in the GDR, her family often received care packages from her family in West Germany. The boxes full of chocolate, pudding, soap, and chewing gum. This box contains the smells of those care packages. What a beautiful way to incorporate object-based learning.

At the end of our presentation she shared her file from the Stasi Archives. After reunification she found personal letters sent to family members in West Germany. This woman who said yes to everything, never got into trouble, worked as a secretary had a file with the Stasi!

When we teach history we can often fall into the trap of teaching dates, events, comparing and contrasting time periods. But, stories are the meat of history. They are the difference between history being another subject in our school day or history making an impact.

During the reflection session at the end of the day our TOP Study Tour group had a long conversation about the big ideas in history. Our experience at Point Alpha had left some of us questioning.

Do we get through content or help students see the big picture and the complexities of history?

I think I’ll go with the latter.