I thought I knew about bread…

And then I met Frau Schneider, master baker trainer extraordinaire, at the Faber Bakery in Geisa, Germany. The bakery, open since 1553, sits near the German inner border.

The Faber Bakery makes 15 different types of bread, but that is just a fraction of the 400 types of bread known in Germany. Hundreds of years ago each German state developed their own bread, leading to the plethora of breads now available in Germany. All of these breads come from the base dough of sourdough.

The Faber Bakery has a rich history as a family owned bakery. They have had their ups and downs. In 1883 the bakery was the cause of a city-wide fire. The bakery survived two World Wars and the Communist era. Now they are struggling through a new challenge. Frau Schneider is the first female to run the bakery and her children have no interest in keeping the bakery going.

Becoming a baker in Germany requires training through the German apprenticeship program. A student leaves Hauptschule, one of the three tracks of the German school system, after grade 10. For three years students serve as apprentices. In the past the Faber Bakery has always had at least one apprentice on site. That is, until recently. Younger people are not as interested in becoming bakers as they used to. Frau Schneider blames this on the early hours. Baker and pastry chef are two different trades in Germany.

During our visit to the bakery we learned the story of St. Elizabeth, the patron saint of bakers. Elizabeth was known for sharing bread with the German people during a time of famine. This statue stands watch over the back bakery at Faber Bakery.

Frau Schneider also shared the baker coat of arms with our group which says “Honor the bread, the pride of our work.”

For years bakeries have been a social institution in German towns, a place people visited regularly. Up until the 1970s the bakery could be used by locals who brought cakes and goodies in to be baked in the bakery ovens.

Obviously, the best part of the visit was the tasting at the end. 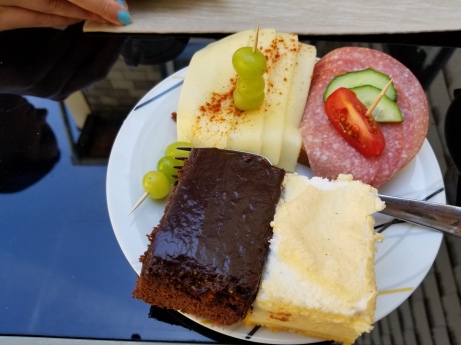